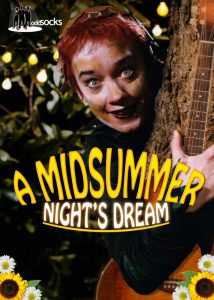 “From the company who brought you bonkers and brilliant Romeo and Juliet and downright funny Macbeth.  Experience A Midsummer Night’s Dream as this Summer’s festival of music, magic and mayhem!”

Four young lovers run away to a summer festival in the woods to escape the stress of parental expectations at home. Before long, they unwittingly find themselves the subjects of tricks, played on them with hilarious results. Add to that a troupe of amateur actors hired to play at the festival and you have the perfect recipe for an evening of hilarious family entertainment.

Members of Drama and Theatre Club @ ‘A Midsummer Night’s Dream’

What an amazing night !  Armed with picnics, blankets, rugs and camping chairs, Drama and Theatre Club children were given front row positions for the performance.  Oddsocks’ adaptation of ‘A Midsummer Night’s Dream’ was fast-paced and totally hilarious.

The children had a wonderful time and enjoyed every second.  The entire show was a highlight – but children particularly enjoyed Mr. Kynaston’s cameo performance as ‘the wall’ !  Members of the cast chatted to the children before the performance, during the interval and after the show.

As usual, members of Drama and Theatre Club were fantastic ambassadors for our school.  Indeed, several members of the audience commented on their excellent behaviour.