Book Review: An Eagle in the Snow 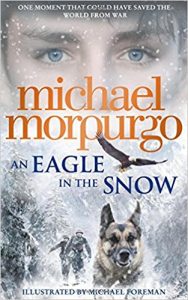 ‘An Eagle in the Snow’

This is a fantastic book about a man called Billy Byron who could have stopped World War Two.  A stranger tells a story to a little boy called Barney.  Barney is on a train that is hiding in a tunnel from a German fighter plane.  The stranger is telling Barney the story of Billy Byron.

It is an amazing book and has brilliant illustrations.  It’s one of my favourite books.