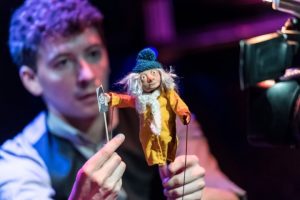 On the morning of Friday 2nd November (2018), members of Drama and Theatre Club went to the Liverpool Everyman Theatre to see ‘The Missing Light’.

You’re never too old for hopes and dreams – there’s always time for plans and schemes.

The children saw an enchanting show about hopes, dreams, togetherness and true friendship created by the same team who brought At The End of Everything Else to the Everyman in 2016.

When Warple moves into a small fishing village by the seaside, he discovers his neighbour, Hilda, looking out towards the horizon each night, searching for a glimpse of her long-lost husband. When loneliness, curiosity and a far-off flickering light brings them together, the two elderly friends embark on a surprising journey to reconcile their pasts and find what might lie within their futures.

Drama and Theatre Club children saw how the company used puppetry, film, music and live animation to create a story that was both moving and technically stunning in equal measures.

Drama and Theatre Club children at The Liverpool Everyman Theatre before seeing ‘The Missing Light’.