This Song Will Begin Once Again 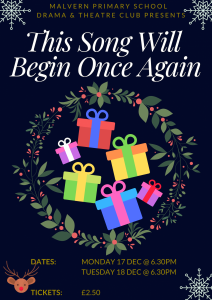 Auditions for Drama and Theatre Club’s 2018 Christmas production – ‘This Song Will Begin Once Again’ – took place before the autumn half term and parts were cast.  Children had their scripts for over a month and worked hard to learn their lines and rehearse the play.

About ‘This Song Will Begin Once Again’

It’s the last day of the autumn term and Mrs Briggs and her class are getting ready to finish for the Christmas holidays.  But it will be a day of mixed emotions because Mrs Briggs is retiring after a long time as a teacher.

Join Mrs Briggs and her class (and a visitor from afar) for a series of magical stories that will transport you from TV in the ’70s to the battlefields of World War One via Good King Wenceslas and Santa’s grotto.

Review (emailed by a member of the audience):

I really enjoyed the show on Tuesday !  I thought the scenes were presented with great presence and stage awareness, and I particularly thought the WW1 scene was deeply felt and moving.  Such stillness and powerful communication. (The silhouette effect behind the soldiers and at times behind the actors reminded me of ‘The Paper Cinema’s Macbeth’ at the Everyman.)

I also loved the 70s nostalgia…the two Ronnies and the music. The Chris de Burgh song seems ever meaningful now !  The elf story was also really dynamic ! The story with the retiring teacher was a clever way of reflecting on and celebrating Christmas.

Thanks to all the Drama and Theatre Club for their hard work to make such a thought provoking and fun show.  It was exuberant.

Colour Stills from ‘This Song Will Begin Once Again’

ABOVE: It’s back to the ’70s with The Two Ronnies.  Actors: Dominic, Luca, Raffaele and Francesco.

ABOVE: The story of Good King Wenceslas.  Actors: Lydia, Eva and Mihaela.

ABOVE: A Christmas miracle – soldiers of World War One write home to tell their families about the 1914 Christmas Truce.  Actors: Amy, Ava, Claudia and Sinethi.

ABOVE: The Nativity….and the travelling spaceman.

ABOVE: The cast take a well-deserved curtain call !

ABOVE: A final song and lots of praise – it’s all over for this year.

ABOVE: Sound and lights – Mrs Davies and Mr Kynaston

Black & White Stills from ‘This Song Will Begin Once Again’

ABOVE: The story of Good King Wenceslas and the 1914 Christmas Truce. Actors: Lydia, Eva, Mihaela, Claudia, Sinethi, Amy and Ava.

ABOVE: A few final photographs.

A Ray of Hope

At the Number 15 Bus Stop