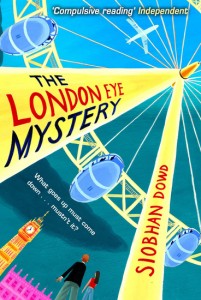 Siobhan Dowd’s ‘The London Eye Mystery’ was chosen by Year Five and Year Six Book Club members as their book for the summer term 2016.

Here’s what www.lovereading4kids.co.uk says about the book:

When Salim mysteriously disappears while on a ride on the London Eye, everyone is frantic and even the police are baffled. Ted has his own theories, and his own very particular way of working things out. The question is, is his theory right and will the others listen to him?

This is Siobhan Dowd’s second novel – but it’s clear her talent as a superb storyteller is beyond question. Sadly, however she died in late 2007 so whatever you do don’t miss her four novels. Her first, ‘A Swift Pure Cry’, was shortlisted for nearly all the major awards – and although this second novel is very different it has that same page-turner quality about it.  ‘The London Eye Mystery’ is a beautifully written mystery set in Manchester and London and featuring two young boys, one of whom disappears on the London Eye shortly before he’s due to emigrate to the US with his mother.

Siobhan sadly only published four books in total before her tragic death. They were ‘Solace of the Road‘, Bog Child’, ‘A Swift Pure Cry’ and ‘The London Eye Mystery’ but her memory lives on in a Trust that has been set up in her name as well as through her writing.

A fifth book, ‘The Ransom of Dond’, was published in 2013.  Partick Ness’s Carnegie Medal winning book ‘A Monster Calls’ was based on an idea written down by Siobhan Dowd.