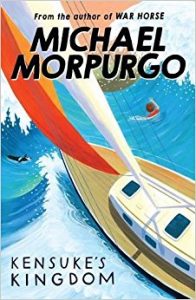 This is a fantastic book about a boy named Michael who lives on a boat called ‘The Peggy Sue’.  One day, Michael and his dog fall off the boat.  Michael spots his lost football and grabs onto it….and drifts off to sleep.

When he wakes up, Michael finds that he is stranded on an desert island – with his dog.  But someone is leaving food for him.

He is not alone….