‘I Am The Seed That Grew The Tree’

I Am the Seed That Grew the Tree is a lavishly illustrated collection of 366 nature poems – one for every day of the year. Filled with familiar favourites and new discoveries, written by poets, including John Agard, William Blake, Emily Dickinson, Carol Ann Duffy, Robert Frost, Christina Rossetti, William Shakespeare, Thomas Hardy and many more, this is a perfect book for children (and grown-ups!) to share at the beginning or the end of the day.

This ambitious book has over three hundred fully-illustrated pages (the equivalent of ten picture books!) of poetry, in a beautiful and lavishly-produced hardback edition, and a stunning collection of material, spanning hundreds of years – from sonnets to haikus.

The poems have been collected by Fiona Waters – with illustrations by Fran Preston-Gannon.

Award-winning Grace Nichols creates all the moods evoked by the title in this beautiful anthology.

In poems such as ‘Sun, You’re a Star’, Nichols gives her own account of the universe.  In a sequence of poems about the seasons, including ‘Sir Autumn’ and ‘Lady Winter’s Rap’, Nichols paints the world freshly for her readers.

Every poem is a delight in itself – while together they give readers a newly painted world.

‘Cosmic Disco’ was published in 2013 and is illustrated by Caroline Binch.

the deep velvet of space

to beam back a dream-scape of shapes

making us gasp and gape

of turquoise and emerald

to snap up all the jewels

in the ocean of a vast celestial bubble.

Roger McGough taught at St.Kevin’s Comp in Kirby and was a lecturer at Mabel Fletcher College.  He presents ‘Poetry Please’ on BBC Radio 4.

This collection has over 50 poems.   From pies to pandas, from school to scarecrows, this is a wonderfully funny and often thought-provoking collection.  It’s full to bursting with sharply observed poems, rhymes and riddles.

The collection was published in October of 2015 and includes many of the poet’s own line drawings.  For age 7+.

There’s a girl in our class called Lola

Who drinks nothing but sweet fizzy cola

‘Though I’m certain to burst

I’ve still got a thirst

And I’m left with only one molar.’

‘I Wish I Had a Pirate Hat’ by Roger Stevens 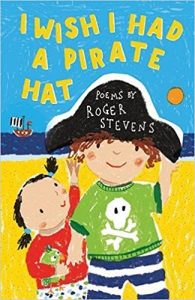 Described by www.lovereading4kids.co.uk as ‘poems to chase the clouds away’, the book is split into three sections:

The subjects will all be familiar to little children but the poetry makes them special.

Look out for Billy, who is impervious to teacher’s fairy dust:

‘She sprinkles it on naughty boys / It stops them being silly / And helps them work, and sit up straight / It doesn’t work on Billy !’

For age 5 years+…….but could be read to younger children.

One for the ladybird in her coat of black and red

Ten for the centipedes living in the shed

Fifty for the pea bugs underneath the mat

One hundred for the flies flying round the cowpat

One thousand for the worker ants working on the ground

One million for the tiny creatures living all around

‘Things You Find in a Poet’s Beard’ by A.F. Harrold

‘Things You Find in a Poet’s Beard’ is a collection of poems that have been shouted at children from schools to church halls, silly tales that have been illustrated joyously by former Children’s Laureate, Chris Riddell – and bound into a book.

A.F. Harrold is a poet who writes and performs for both adults and children.  He has also written a number of children’s books, including the ‘Fizzlebert Stump’ series.

How d’you fit a genie in a bottle ?

How d’you fit a world inside a book ?

How d’you fit the sun into the summer ?

How d’you fit a mountain in one look ?

How d’you fit an oak inside an acorn ?

How d’you fit the wind under a kite ?

How d’you fit your sweetheart in a locket ?

How d’you fit the dark into the night ? 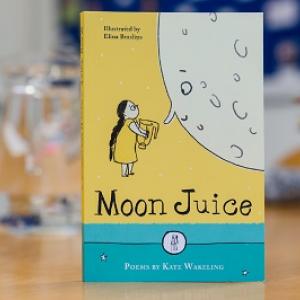 Kate Wakeling’s first book of poems for children is full of curious characters and strange situations. The poems are always musical, sometimes magical, and full of wonder at the weirdness of the world.

In this brilliant book, you’ll meet Skig, who’s meant to be a warrior – but is really more of a worrier.  You’ll meet a giddy comet skidding across the sky with her tail on fire.  And you’ll put a marvellous new machine in your pocket and maybe you’ll be able to fix all of life’s problems.

The poems are illustrated by Elina Braslina.

CLiPPA is the Centre for Literacy in Primary Poetry Award.  Kate Wakeling won the 2017 CLiPPA award for children’s poetry for ‘Moon Juice’ (her debut collection), published by independent publisher The Emma Press.

A scab’s your own personal pie crust,

its insides cooked up nice and pink.

Make sure not to fiddle before it is done:

an itch tells you it’s on the brink.

Yes, a scab’s your own personal pie crust,

and I favour a filling of knee.

But don’t think that this morsel’s for sharing:

this pie crust belongs just to me.

This is a favourite and best-selling collection of poems about school, compiled by John Foster.

Most the poems here are humorous, but some are more serious and will make you think.  Many of them have been written specially for this collection and, together with other poems by such well-known children’s poets as Michael Rosen, Kit Wright, and Spike Milligan, go to make up a lively and engaging anthology.

A noun is a naming word.

What is the naming word in the sentence:

‘He named the ship Lusitania’ ?

A verb is a doing word.

What is the doing word in this sentence:

An adjective is a describing word.

What is the describing word in this sentence:

I know it is, said George.

What do you mean you don’t like poetry ?  This must mean you’ve not read the debut collection of poems from Joshua Seigal !  Whether it’s poems about the power of books or the joys of fried chicken, once you’ve read Joshua’s poems you’ll be shouting from the rooftops that poetry is the place to be!

Packed with subversive humour and a real insight into the world of children today, I Don’t Like Poetry will please the most reluctant of poem readers – whether they want something funny, sad or scary.  It is a wonderful collection that shows a new poet at his best.

the walls spun round,

the day the poet came.