On Thursday 12th September, members of Drama and Theatre Club were at Liverpool’s Empire Theatre for ‘Blood Brothers’.

Written by Willy Russell, the legendary ‘Blood Brothers’ tells the captivating and moving tale of twins who, separated at birth, grow up on the opposite sides of the tracks, only to meet again with fateful consequences. Few musicals have received quite such acclaim as the multi award winning ‘Blood Brothers’.  Bill Kenwright’s production surpassed 10,000 performances in London’s West End, one of only three musicals to ever achieve that milestone. 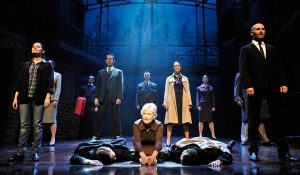 Children and teachers had an amazing time and were blown away by the cast’s passion and energy.  As is always the case, members of Drama and Theatre Club were impeccably behaved.  An audience member commented to a member of staff that she thought her evening would be ruined by ‘a load of noisy kids’…..but once the curtain went up, she said that she didn’t even know we were there…..and that our children were a credit to our school.