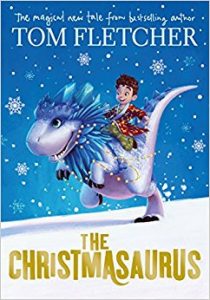 This book is about a boy called William Trundle and his dad (Bob Trundle) – and it’s about a dinosaur, Santa, a hunter, his dog and a little girl called Brenda Payne.

The dinosaur’s mum and dad are dead and he is left alone.  One day, Santa finds him and takes him to the North Pole.  Santa makes a dinosaur teddy for him and the dinosaur loves it.

When Santa lets the dinosaur join him to deliver presents, they go to William Trundle’s house.  When William wakes up, the dinosaur becomes his forever.

Isabelle tells us that this is her favourite book and that Tom Fletcher is a member of the pop group McFly.  Isabelle ends her review by saying: ‘There is a book in everybody !’