‘The End of the Sky’ by Sandi Toksvig 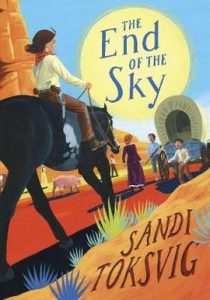 The host of TV’s QI, Sandi Toksvig, has published several books for kids.

‘Hitler’s Canary’ is set in Denmark in 1940 and features Bamse and his theatrical family.  It tells the story of the Danish struggle against German occupation and the smuggling of Jews to safety in Sweden.

‘A Slice of the Moon’ follows the fortunes of Slim Hannigan – a young girl growing up in Ireland at the time of the potato famine.  Slim’s father swaps the family pig for a small printing press and sets in train a series of events that lead to the family emigrating to America.

‘The End of the Sky’ was published on 5/10/17 and tells the story of Slim’s journey across America in search of her uncle.   For age 9+